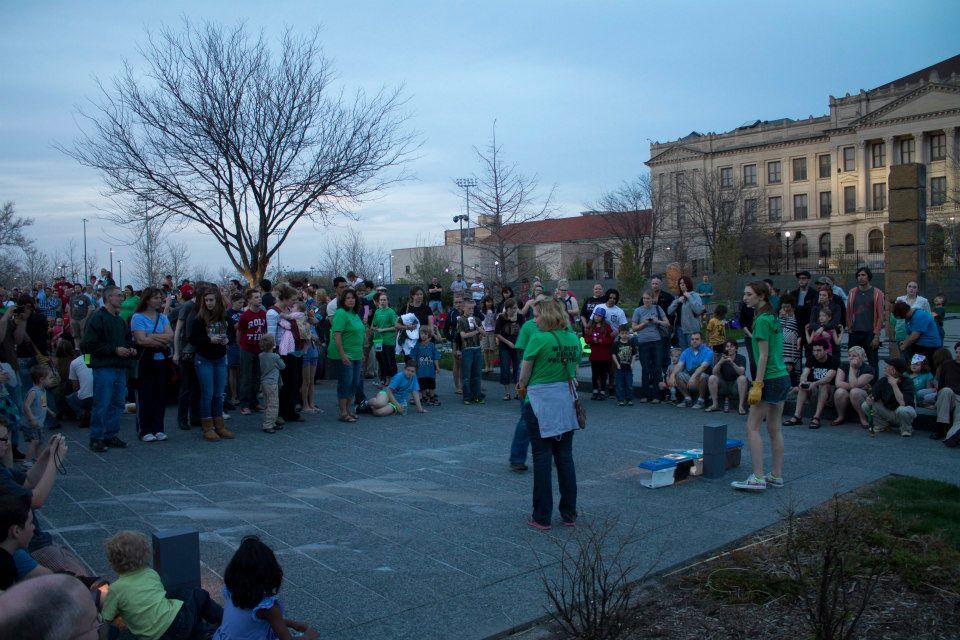 Although we can't gather together this year for Bat Release, we are going to share it with you virtually!  Join us on Tuesday, April 21st at 7:30 PM on Facebook Live to hear about how the COVID-19 pandemic has affected bat rehabilitation and bat release, to ask questions of our director, and to watch the bats get released!  You can find our Facebook page here.  Hope to see you at Virtual Bat Release!

Each spring, NWRI releases over 300 bats back into the wild, after taking care of them all winter. These bats are mostly big brown bats, but don't let the name fool you! An adult big brown bat weighs less than 1 ounce!

We release our bats at the Joslyn Art Museum at 24th and Dodge in Omaha and we invite the public to join us.  There are activities for children, educational tables, and roving bats to keep the crowd entertained. The public is invited to come as early as 6PM to stake out a spot on the lawn and enjoy a picnic dinner.  Bat release takes place at dusk and is generally wrapped up about 45 minutes after it begins. Please leave your dogs and other pets at home for this event, for the safety of any bats that may accidentally end up on the ground.

When to Expect the Release

Bat release can happen any time between the end of March and the beginning of May. We release the bats on the earliest possible date, taking into consideration current conditions, weather forecast, and insect populations. Because this is all about the bats - the release happens when it works for them. We will notify the public 48-72 hours prior to the release, and hope that you can join us!

How to Be Notified of Release Time

We receive hundreds of bats during the winter months when they should be hibernating. Most come from inside buildings where they have set-up winter roosts. All of the bats in Nebraska eat insects. When they are found in buildings in the winter, they must come into rehab, regardless of whether they are injured or not. This is because it is too cold outside for them and there is nothing for them to eat in the winter.

Our rehabilitators treat any injuries and feed the bats until they are of an appropriate hibernating weight. They are then placed in artificial “hibernacula” where the temperature and humidity are closely monitored so they can sleep the rest of the winter away.

In the spring, once there are abundant insects and the free bats are flying, we start looking for a good stretch of weather to let our bats free again. We watch for appropriate temperatures, wind speed, and the threat of rain to decide when we are going to release our bats. Once we set a date, we notify the public that bat release is on!

Bats are extremely critical to our natural enviroment and each individual is important to bat populations in Nebraska. We thank you for caring about bats as much as we do!

Where Do The Bats Go When They're Released?

We release our bats at the Joslyn Art Museum in Omaha each year. This is a fabulous venue for several reasons — First, it allows you to come out and see the release and to learn more about bats. Second, it is close to home for many of the bats. Most of our bats come from eastern Omaha and there is good evidence to support that the bats "go home" when released. This means that when we release downtown, we're giving most of the bats the shortest trip home. If you live in the neighborhood, don't worry — the bats aren't going to make a new roost in your house if you don't have bats there already. They are going to go back to their home roost as soon as they can.